Wreck This Journal (#2) {A Little of the Book Life}

Guys, I am loving Wreck This Journal. Seriously. So. Much. Fun. And it's great that Malissa is doing it as well. It's cool to see how we do things differently or the same. It really kinda tells me something about myself when I look at one of the pages and I think "Um... No. I don't think I can do that."(Here's the first post on the journal...)

Here are a few pics from this past week's adventures with the journal:

This one is going to take me a while. Mostly because I'm having fun with it and using it as a random doodling page. :)

I started with a glue stick. Then thought I'd have fun with a bottle of liquid glue. It took a while to dry, and it was hard as hell to actually draw with them, but the end result was cool.

I know the instructions say to basically do whatever you want. But I've always been a rule follower. So I tried to rip on the lines. That took a LOT of work. HAHA

I swear I closed my eyes!!!!  I sent the pic to Malissa and told her maybe I should do more things with my eyes closed. :)

Malissa has been having just as much fun with her journal! :) 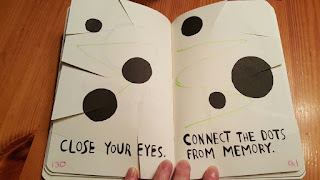 Excited to see what other fun we can get up to.

Have any of you done this? Share your experiences if you have!!!  :)

Assignments {A Little of the School Life}

I completed my first assignment for school. What our instructor calls 'challenges.'  And it was daunting, to say the least. I haven't attended school in 10 years. That's a loooong time in school years. And there were nine 'steps' in this challenge. The first challenge? Nine steps?!

Admittedly I overthink things. Big time. Once I just started addressing each step, noting what needed noted etc etc, all went well. I mean, I assume it did. I felt pretty good about it before I submitted it. I haven't gotten a grade on it yet, tho. But... I did it. First assignment. Done. And I got to talk about movies, and books, and wishlists. The worst part was giving examples of things. But... phew. One down...

Email ThisBlogThis!Share to TwitterShare to FacebookShare to Pinterest
Labels: school

Wreck This Journal {A Little of the Book Life}

My friend Danielle got me this book for Christmas: 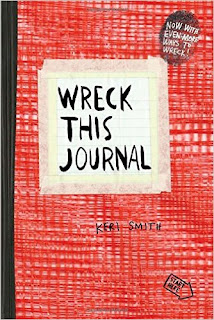 For anyone who's ever had trouble starting, keeping, or finishing a journal or sketchbook comes this expanded edition of Wreck This Journal, an illustrated book that features a subversive collection of prompts, asking readers to muster up their best mistake and mess-making abilities and to fill the pages of the book (or destroy them). Through a series of creatively and quirkily illustrated prompts, acclaimed artist Keri Smith encourages journalers to engage in "destructive" acts--poking holes through pages, adding photos and defacing them, painting pages with coffee, coloring outside the lines, and more--in order to experience the true creative process. With Smith's unique sensibility, readers are introduced to a new way of art and journal making, discovering novel ways to escape the fear of the blank page and fully engage in the creative process.

Have you seen this? Like the inside of it? It's really pretty cool. And pretty scary.

The instructions are simple enough: 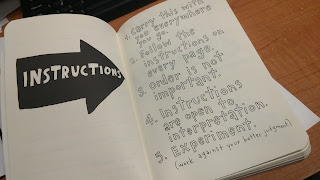 And the first page wasn't hard at all... 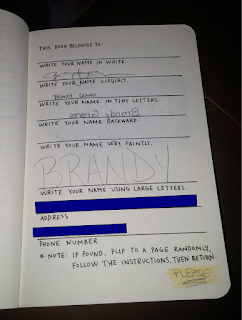 And then there was this, which was great for releasing some stress/aggression: 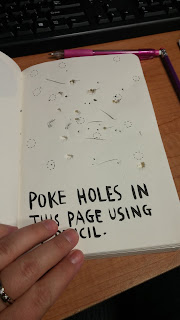 But shit got real when I looked at this one - 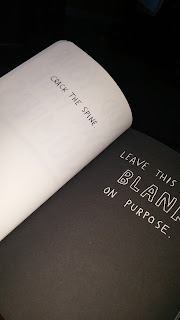 And what the what?! 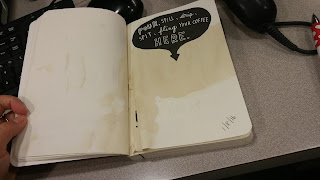 When I got this, Malissa mentioned how cool it would be to do together with someone. I sent her one. I agreed. And it's worked. We keep texting each other about it. Like this one, this morning, that I got from her:

"Pretty impressed with myself. I found six different fruit stickers for my journal at my house this morning!"

And this pic from her: 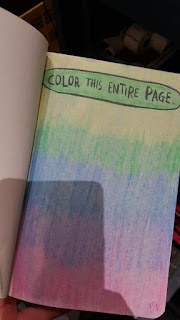 Seriously... I Can Use This One ~ {A Little of the School Life}

Classes started two days ago!!! So I can say "A Little of the School Life". I'm really excited, nervous, anxious, overwhelmed...


One class is a pre-req undergrad course. It's computer stuff. Some of which I know, some I don't. But thus far the readings are simple enough that if I don't know about it I can sort of catch on quickly. We'll see how I feel when I start on the projects for that one.

The other is all about Collection Management. Which interests me, but that textbook is going to be the bane of my existence. Tiny print, NO pictures/graphs whatsoever... not much whitespace. Kill. Me. Now. haha!  Hopefully the assignments won't be as daunting as they look. :)

My son is super confused why I don't go to school. He also doesn't understand why I'm not going to his school. At least that brought up the different levels and types of schooling, so we were able to discuss that and how some professions require different levels of schooling. I mean, he's 6. He doesn't have to plan his life out yet. But it's good to keep that in the back of his mind as he grows. He knows education is important, and I'm looking forward to being able to not only talk about that to my children, but to show them by example.
Posted by Unknown at 7:00 AM 2 comments:

My kids are 4 & 6. And they are amazing little creatures. Mostly.

But let's take yesterday, for example. I'm not entirely certain that amazing would have been a word I used to describe my little bundle of joys. As anyone who has any experience with children - their own or others' - they know that little ones (and big ones) aren't exactly angels 24/7. Don't let those peeps on Facebook/Instagram/Twitter fool you. ;)


So. Yesterday. I wake my son up first. He's the 6 year old. A first grader who loves school, misses his friends when he's not there, but also loves staying home, snuggles, and playing with his sister and cousin. There was a two hour delay when we got up. I got breakfast ready, we went through the whole packing of the lunch routine and getting dressed, teeth brushed, etc etc. I knew there was a chance school would be cancelled. In hindsight, I may not have wanted to mention that to this particular six year old. But whatever. It was time to go. And given my propensity to stay in bed until the literal last minute possible, it was time to go. I say "get your shoes on." This is a regular, nearly daily, occurrence. Nothing new. Eli says "Which ones should I wear?" I say, "Well, there's snow on the ground and it's really cold out, so I would think you would want to wear your snow boots so your feet stay warm and dry." Insta-tears. And I mean a full-on-wailing-meltdown:


I suggested he take shoes to change into, even offered to send a bag for the wet snow boots... For the next ten to fifteen minutes (yes, unfortunately it took thatlong), I discovered that (all according to him) his teacher wouldn't let him change into his tennis shoes to wear those at school and that he was afraid that other kids would make fun of him because they weren't the shoes he normally wears. Oh, and my suggesting he wear snow boots was me telling him he had to wear snow boots. Finally, after some *ahem* yelling on my part, some near butt-spanking, he stopped crying, but not moping, and we were out the door. Only to discover ten minutes later that school was cancelled for the day. Elation ensued on his part. (Until I dropped him off at my sister-in-law's house and he realized that, since we thought he was going to school, he didn't have GiGi - his blankie. Whoops.)


And this morning? Another two hour delay. I say "Time to get shoes on," a little hesitantly. I don't know that I can deal with another morning like that this soon. He says, and I quote, "I'll wear my snow boots so my feet stay warm. And dry. I don't want snow in my shoes." I just look at him. He continues on to say, "And since we have gym I'll take my tennis shoes so I can change into them. Can I have a bag for my shoes?" What the - WHAT?!


*sigh*  Ahhh... the joys. I can laugh now. But last nite required a half bottle of wine and some mindless television.