Leading to a Lifelong Love (Hopefully) 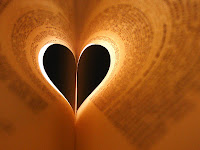 I've always had a love of reading as far back as I can remember.  I would stay up too late reading and be a bear to get up in the morning.  So much so that my parents took away my flashlights so I couldn't read in my bedroom after bedtime anymore... I nearly wore out my copies of The Ghost of Windy Hill by Clyde Bulla and Popcorn by Frank Asch as an early grade school child.  By fifth grade I was relishing in the author Lurlene McDaniel and her depressing yet captivating books.  Specifically her series "One Last Wish" and "The Dawn Rachelle Series."  I devoured books all through high school - LJ Smith (before her series became a show... I still own the originals...), Christopher Pike, Anne Rice, Dean Koontz... apparently I really enjoyed supernatural and horror type stories.  :)  I currently am having a book affair with Young Adult fiction, but still read a smattering of books geared toward adults.

It's always been my hope that my children would love to read as much as I love it.  So far, I must be doing something right.  My son, who is three, has always been attached to his books.  He used to get mad if we took a book away (if was time to eat, leave, what have you), but was fine if we took a toy away.  This morning at breakfast he and I were talking.  I told him we needed to go to the store when I get off work and get milk and syrup.  Our conversation went as follows:

Eli: And get books?
Me: You want to go to the library?
Eli: Yeah.
Me: Hmm... (finger to chin) Let me think about it.
Eli: Hmmm (finger to forehead) Let me check my thinker.

After I nearly cried from laughing it was decided if he was good at the sitter's today then we will go to the library and he can pick out some books.  Smiles and excitement followed.

Zoe is still a little young to know how she will go, being only eight months and all, but I think we're on the right track.

Even if they don't read avidly all their lives, hopefully this will lead to great things.  Only time will tell.  In the meantime I'm just going to enjoy every minute of it.  :)

Beautiful Creatures is a story about choices, love, and the impossibility of it all.

Synopsis: Meet Ethan, a 16 year old boy who is eagerly anticipating his departure from small town boredom and monotony.  Enter Lena, a 15 year old transplant living with her uncle who is desperate to keep her powers hidden and live a normal teenage life as she awaits certain fates.  Ethan is inexplicably drawn to her and is determined to decipher the strange connection between them, even if it means revealing secrets that could change everything.  [paraphrased from Goodreads]

There is much to love about this book, starting with the cover.  I'll be honest, I was drawn to the book based on that.  Then I read the inside flap and wanted to dive in.  I was a bit skeptical at first - more YA romance, two authors, the sheer length of the book, more paranormal/supernatural themes (Would it be original?) - but all that was forgotten fairly quickly.

I was pleasantly surprised to discover that the story is told from Ethan's point of view rather than Lena's. Despite it being written by two women I did feel as if the voice was true to a teenage boy (however, keep in mind I am not a teenage boy nor have I ever been).  A bold move, well done.  This helped in the romance development due to the lack of "girly" swooning and over exaggeration of looks/feelings/etc.  The pull between Ethan and Lena was palpable and felt genuine.

The more traditional supernatural styles that are portrayed was fairly refreshing.  As much as I have enjoyed all types, the basic witch-feel by way of Casters kept it very simple.

The supporting characters are so much more than supporting characters - they can stand on their own. To highlight a few, Macon is strong, sarcastic, snarky.  One of my favorite quotes from Macon:
"Are you insinuatin' that my daughter is a liar?"
"Oh, no, not at all.  I'm saying your daughter is a liar.  Surely you can appreciate the difference." [Macon]
Amma is unrelenting in her protectiveness and I loved her straightforwardness.  Link is probably the most accepting friend anyone could have, but in such a real way.  Even though he supported Ethan in a multitude of ways, he still did what he need to do to survive; they accept each other as they are with no questions asked, which makes for a great basis for a lasting friendship.

Of course, being not only a lover of books/reading but also a librarian, I loved the important role that Marion and the library played.  I am not a history buff, but I did also enjoy how wrapped up in the Civil War the town was, and how it all related to the present.  A great excerpt:  "It was like being born in Germany after World War II, being from Japan after Pearl Harbor, or America after Hiroshima.  History was a bitch sometimes.  You couldn't change where you were from.  But still, you didn't have to stay there.  You didn't have to stay stuck in the past, like the ladies in the DAR, or the Gatlin Historical Society, or the Sisters.  And you didn't have to accept that things had to be the way they were, like Lena.  Ethan Carter Wate hadn't, and I couldn't either.

The only downfalls are 1) I now feel like I should read To Kill a Mockingbird, given that I've never read it.  I knew enough about it (given that it's a classic and all) to understand all the references, but now I'm intrigued enough to read it.  So I guess that's not really a downfall, unless adding to my already towering pile of books to read counts as a downfall.  And 2) I had to wait an entire week before Beautiful Darkness arrived!


For my first post, I thought I'd dive back into my reviews from Goodreads and choose one that I thoroughly reviewed rather than put the pressure on to create a new one.  Although I'd probably re-write some of it, I'm taking it as-is.

Spoiler Alert: some details pivotal to plot may be given.

Note to self: never read, or take stock in, other reviews prior to reading a book.

I picked this book with low expectations.  Condie met them head-on.  In the beginning we meet Cassia who, on her 17th birthday, attends her Matching Banquet.  The matches are based entirely on data and determined by the Matching Committee.  There is no choice in the matter.  She ends up matched with her best friend, Xander, from the same Province, which is a very rare thing.  Most are matched with people outside of their Province and they get to know these people through the microcard they receive at the banquet and their first meetings are controlled by the Society Officials.  However, when Cassia decides to look at Xander's microcard, there's a flash of another boy's face from her province as well, Ky, for just a second.  An Official comes to tell her that all is well; it was a glitch in the system, yada yada.  But it makes her wonder.  She is allowed to tell one person, her grandfather (he is set to die on his 80th birthday, as all members of Society are).  He tells her it is okay to wonder.

So basically we are seeing this slow build of Cassia wondering and questioning.  She gets to know Ky better through scheduled leisure times and he teaches her how to write.  He tells her his story of how he came to live in their Province with his Aunt and Uncle (who he calls mom and dad).  She feels she can share things with him that she shares with no one else - not even Xander, who has, until now, been her closest confidante.  There were parts of the relationships that were awkward to me, such as the "sudden" need to know Ky after years of only considering him in passing.  Also, the ambivalence toward Xander after seeing Ky's face.  Unlike some others, I did feel her connection with Ky and it didn't seem contrived.  I did feel, however, there could've been more development of her relationship with Xander in the present, not just telling us of their past, to help us really feel that connection and be torn between Xander (safety) and Ky (choice) with her.

The story starts out a little slow, but the writing, for the most part, makes up for that.  There's a little mention of unrest/war among the Outer Provinces but no details.  We're left not knowing who is really fighting and exactly why they're fighting.  It was like a wave coming in off the ocean and dissipating before it reaches your feet.  Here's a bit of information and it's building, building... gone.  I know it's part of a series and there will be more to come, but I still felt empty.  There're a few other things like that as well.  The changing of the Borough's name; the red pill having been taken before and it not working on everyone (wouldn't the Society have picked up on that?).  The society controls so much and wants everyone to believe they control everything.  Cassia's realization that they don't, they make mistakes, is eye opening for her.

Also unlike others, I did not feel this was a complete rip-off of other dystopian novels.  Let's be fair - there are bound to be similar elements when writing any story, no matter what genre, to other books within that genre.  That being said I did feel this book was fairly original.  Not as original as some, but not so similar that I felt betrayed.

This first installment seems to be more about showing Cassia's progression from total acceptance to questioning to defiance.  In the end her choice is this: is it better to be under complete control of the Society, or to have the freedom of choice?  I am anxious to see what happens in the next book.  I am hoping that it gets more intense and urgent since the story should build on the impending rebellion.

Posted by Unknown at 3:48 PM No comments: